GRIEF – This year marks the 20th anniversary of the Sept. 11, 2001 attacks. While our country commemorates our shared national tragedy, for me, this milestone memorializes the abrupt end of my childhood and continues to impact my life in unexpected, life-shattering ways.

My father, Steven Jacobson, worked on the 110th floor of One World Trade Center. He served as a chief broadcast engineer for WPIX and tended to the transmitter to maintain a clear and crisp TV signal.

“My childhood came crashing down alongside those towers.”

During thunderstorms, he would scale the ladder inside the tower’s 360-foot antenna to make his adjustments. Over the 22 years, he held this job, the signal crashed for a total of only two hours. One time, he even revived the signal using his shoelaces.

On the special occasions that I would tag along, we climbed the extra flight of stairs from his office to the roof. Up there, no one else mattered but me and my dad. I felt like the queen of the world, overlooking the shrunken city that resembled a dollhouse sandwiched between the East and Hudson Rivers.

As a 10-year-old, I eagerly scanned the landscape for familiar landmarks. On the east side of the building, I spotted our apartment building on Grand Street, and to the north, ant-sized kids played in my elementary school’s yard. On a clear day, the impressive view rolled on for miles, stretching to the grey periphery framing the lush greenery of Central Park.

After the 1993 World Trade Center bombing, my dad stayed at his post well past midnight until the signal came back on air. His fellow engineer and close friend, Vic, had called the office while picking up lunch at the cafeteria in the Trade Center’s food court: “Steve! Explosions! Smoke!”

My dad responded: “So, does this mean I don’t get my eggroll?”

He returned home covered head to toe in soot. Later, WPIX awarded him employee of the month with a plaque he proudly displayed to everyone who visited our home.

When I first received the news that two planes had pummelled into the World Trade Center towers, I was sitting in my 8th-grade science class at Simon Baruch Middle School in lower Manhattan. I hoped that this time would be like last time.

My childhood came crashing down alongside those towers.

Our class shrunk rapidly as parents arrived to collect their children. My teacher refused to explain the abrupt turn of events, so my best friend feigned a bathroom emergency in order to investigate what was happening in our school. She returned minutes later with the full report.

I froze as my brain flooded with questions. How do two of the tallest buildings in New York City just fall? I tried to visualize it. Did they tip over into Jersey City or Brooklyn?

My thoughts quickly turned to my daddy. How was he going to get out? How quickly could he run down 110 flights of stairs?

As the week unfolded, my mom filed a missing persons report while I gripped on to the idea he was still alive. First responders continued to uncover people from the rubble. I fantasized that the buildings might have fallen in the exact right way that would protect him instead of crush him. I imagined him concussed, wandering around the city with amnesia trying to find his way home.

Days turned into weeks. Although we hadn’t yet located my dad’s body, my mom organized a memorial service and my family sat shiva, the Jewish seven days of mourning.

“I fantasized that the buildings might have fallen in the exact right way that would protect him instead of crush him. I imagined him concussed, wandering around the city with amnesia trying to find his way home.”

I deemed my family cursed. My oma (grandmother) fled Nazi Germany alone when she was 18 years old. She hid when the Gestapo arrived and eventually escaped when a well-connected uncle bribed an SS officer to smuggle her onto a boat in a burlap potato sack. As I grappled with the reality of my father’s death, I channeled my oma’s courage by putting my head down and powering through.

I became terrified of feeling the enormity of the experience, convinced that feeling a sliver of heartache would propel me into a black hole of emotion. I believed that I could skim the waters of grief and never fall in. So I bottled up my terror, swallowed my tears and entered survival mode. I adopted the mantra: Be Strong. Don’t Cry.

But the trauma had taken up residence in my body, settling deep into my nervous system. At 13, I feared being alone and suffered from migraines, back pain, stomach pain and debilitating fatigue. My body absorbed what my brain couldn’t yet process. Night after night, I comforted myself with spoonfuls of marshmallow fluff and sleeves of Oreo cookies.

Five years later, I moved to Madison, Wisconsin, for college. I dreaded my reputation as ”the girl whose dad died on 9/11.” If I moved a thousand miles away, I thought, maybe I could become invisible and escape my pain.

Instead, moving to the Midwest forced me to confront my trauma head-on. When I proudly introduced myself as a born-and-raised New Yorker — not the kind from Long Island, but a real city kid — my curious peers nearly always followed with the question, “Oh, where were you on 9/11?” Or even worse: “Did you know anyone who died?” 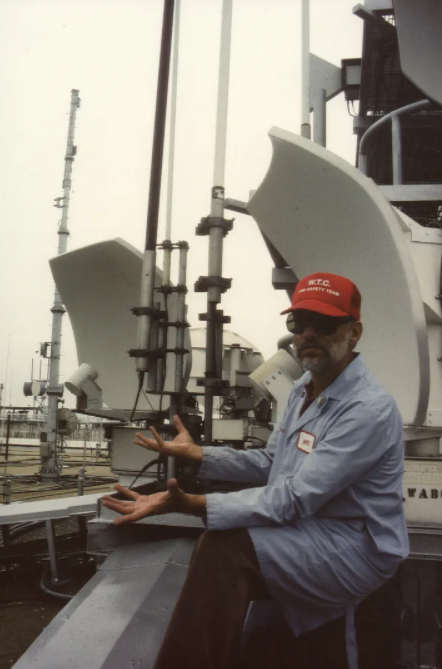 Steven Jacobson perched on the roof of One World Trade Center, pointing out the repeater transmitters, circa 1981.
PHOTO COURTESY OF MIRIAM JACOBSON

The mere mention of 9/11 assaulted me. My body instantly flooded with anxiety, my heart sinking into my stomach as the floor caved underneath me. The billows of smoke and explosions hijacked my ability to stay in the present moment and transported me back inside the trauma and terror I felt on 9/11.

As the city began to heal with the construction of the Freedom Tower, I still stood among the debris and rubble. How would I rebuild the broken pieces of my life?

I finally sought support from a trauma specialist.

Through a combination of EMDR (eye movement desensitization and reprocessing) and talk therapy, I learned the power of embracing my full spectrum of emotions. The hard exterior to which I had clung helped me survive those early years. However, the path of healing ultimately required softening. By sitting with my grief, I began to live my life with more fluidity and ease. In fact, moving through my pain did not swallow me whole; it set me free.

As soon as I started to feel the ground underneath me, the deeper ripple effects of 9/11 revealed themselves. In 2013, my mother lost her battle with stage 4 metastatic lung cancer, a documented World Trade Center-related health condition. In the years following the attack, the public learned that the 10 million tons of burning building material had spewed toxins including asbestos and dioxins into the air and had poisoned our bodies.

First my mother’s body, and then my own.

In 2019, at age 31 years old, I received a breast cancer diagnosis, also a known World Trade Center-related illness. Upon hearing the news, a cold fear washed over me.

Underneath the fear, I felt rage. Despite how much I think I have recovered from my trauma, 9/11 continues to drain me of so much life and infect every aspect of my existence. Trying to heal from its impact feels like I am forever drowning beneath its waves, struggling to catch my breath. But now I know what to do. I allow the rage to flow through me, knowing that the best way to move beyond pain is to wade in its mucky waters.

I have also taken action by submitting claims to the 9/11 Victim Compensation Fund for myself and retroactively on behalf of my mother, since we lived and spent time in the “exposure zone” between September 2001 and May 2002.

Since the attacks, I have spent countless hours meditating on the reverberations of this one act of pure hate. This one act of hate orphaned me by age 25 and robbed me of a life with my family. This one act of hate is quite possibly the reason I have lost my breasts to a double mastectomy, postponed starting a family and will be unable to breastfeed my future babies.

After 9/11, I witnessed our country responding to this act of terror with more violence. Initially, I too wanted revenge, but quickly changed my mind. Doesn’t hate always breed more hate? I wondered if love could do the opposite.

“This one act of hate orphaned me by age 25 and robbed me of a life with my family. This one act of hate is quite possibly the reason I have lost my breasts to a double mastectomy, postponed starting a family and will be unable to breastfeed my future babies.”

The weekend before my diagnosis, I attended a breathwork training where we were randomly assigned, partners. One by one, our group of 60 took turns delivering intuitive messages to each other. “You are not a victim,” my partner told me. “Life is not happening TO you, it’s happening FOR YOU.”

Could I alchemize my experience into a force for good?

Moving through these losses has taught me that life is constantly evolving, that suffering is temporary and can even be composted into personal growth.

Composting happens in the simple choices we make each day. Every day, I wake up and choose to eat nutritious meals, move my body with gratitude and honour my need for rest. I now accept life’s seasons, discerning when it’s time to grow and push beyond my comfort zone and when it’s time to soften and reach for support. I lean on my breathwork practice to reconnect with my intuition, which helps me move through life with more grace and self-compassion.

My personal practice also extends to my chosen work as a functional medicine dietitian, and fuels my desire to help individuals optimize their physical health. I have begun weaving in mindfulness and somatic modalities like breathwork into my client work, seeking to expand our understanding of what nourishment means in a full-body sense.

My family members are victims of acts of hate and violence.

But I am more than a victim; I am an alchemist. The ability to transmute my suffering into healing energy for myself and others infuses my life with meaning and purpose. Today, I no longer ruminate on my family’s curse; instead, I choose to embrace my inherited resilience that pulses through my veins. And I will continue to call on my grandmother’s strength and guiding light on my darkest and most difficult days.

First I crumble, then I rise.