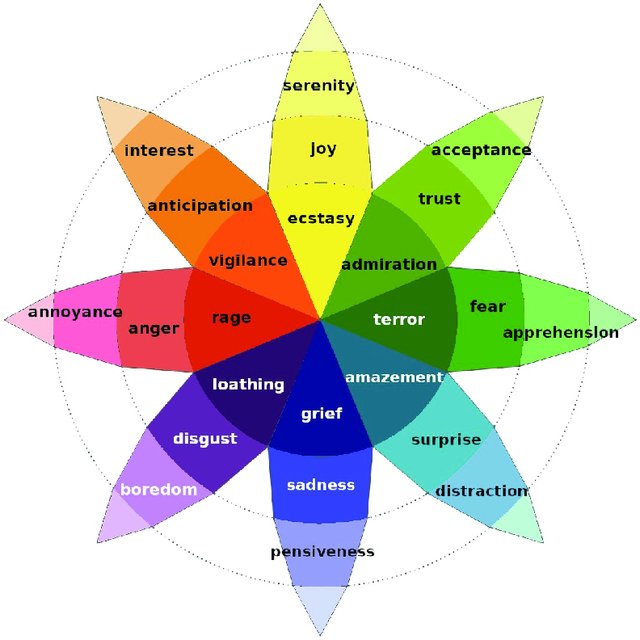 There are many different types of emotions that influence how we live and interact with others. At times, it may seem like we are ruled by these emotions. The choices we make, the actions we take, and the perceptions we have are all influenced by the emotions we are experiencing at any given moment.

During the 1970s, psychologist Paul Eckman identified six basic emotions that he suggested were universally experienced in all human cultures. The emotions he identified were happiness, sadness, disgust, fear, surprise, and anger. He later expanded his list of basic emotions to include such things as pride, shame, embarrassment, and excitement.

Psychologist Robert Plutchik put forth a "wheel of emotions" that worked something like the colour wheel. Emotions can be combined to form different feelings, much like colours can be mixed to create other shades.

According to this theory, the more basic emotions act something like building blocks. More complex, sometimes mixed emotions, are blendings of these more basic ones. For example, basic emotions such as joy and trust can be combined to create love.

A 2017 study suggests that there are far more basic emotions than previously believed. In the study published in Proceedings of National Academy of Sciences, researchers identified 27 different categories of emotion.

Rather than being entirely distinct, however, the researchers found that people experience these emotions along a gradient. Let's take a closer look at some of the basic types of emotions and explore the impact they have on human behaviour.

Of all the different types of emotions, happiness tends to be the one that people strive for the most. Happiness is often defined as a pleasant emotional state that is characterized by feelings of contentment, joy, gratification, satisfaction, and well-being.

Research on happiness has increased significantly since the 1960s within a number of disciplines, including the branch of psychology known as positive psychology. This type of emotion is sometimes expressed through:

While happiness is considered one of the basic human emotions, the things we think will create happiness tend to be heavily influenced by culture. For example, pop culture influences tend to emphasize that attaining certain things such as buying a home or having a high-paying job will result in happiness.

The realities of what actually contributes to happiness are often much more complex and more highly individualized. People have long believed that happiness and health were connected, and research has supported the idea that happiness can play a role in both physical and mental health.

Stress, anxiety, depression, and loneliness, for example, have been linked to things such as lowered immunity, increased inflammation, and decreased life expectancy.

Sadness is another type of emotion often defined as a transient emotional state characterized by feelings of disappointment, grief, hopelessness, disinterest, and dampened the mood.

Like other emotions, sadness is something that all people experience from time to time. In some cases, people can experience prolonged and severe periods of sadness that can turn into depression. Sadness can be expressed in a number of ways including:

The type and severity of sadness can vary depending upon the root cause, and how people cope with such feelings can also differ.

Sadness can often lead people to engage in coping mechanisms such as avoiding other people, self-medicating, and ruminating on negative thoughts. Such behaviours can actually exacerbate feelings of sadness and prolong the duration of the emotion.

Fear is a powerful emotion that can also play an important role in survival. When you face some sort of danger and experience fear, you go through what is known as the fight or flight response.

Your muscles become tense, your heart rate and respiration increase, and your mind become more alert, priming your body to either run from the danger or stand and fight.

This response helps ensure that you are prepared to effectively deal with threats in your environment. Expressions of this type of emotion can include:

Of course, not everyone experiences fear in the same way. Some people may be more sensitive to fear and certain situations or objects may be more likely to trigger this emotion.

Fear is the emotional response to an immediate threat. We can also develop a similar reaction to anticipated threats or even our thoughts about potential dangers, and this is what we generally think of as anxiety. Social anxiety, for example, involves an anticipated fear of social situations.

Some people, on the other hand, actually seek out fear-provoking situations. Extreme sports and other thrills can be fear-inducing, but some people seem to thrive and even enjoy such feelings.

Repeated exposure to a feared object or situation can lead to familiarity and acclimation, which can reduce feelings of fear and anxiety.

This is the idea behind exposure therapy, in which people are gradually exposed to the things that frighten them in a controlled and safe manner. Eventually, feelings of fear begin to decrease.

Disgust is another of the original six basic emotions described by Eckman. Disgust can be displayed in a number of ways including:

This sense of revulsion can originate from a number of things, including an unpleasant taste, sight, or smell. Researchers believe that this emotion evolved as a reaction to foods that might be harmful or fatal. When people smell or taste foods that have gone bad, for example, disgust is a typical reaction.

Poor hygiene, infection, blood, rot, and death can also trigger a disgust response. This may be the body's way of avoiding things that may carry transmittable diseases.

People can also experience moral disgust when they observe others engaging in behaviors that they find distasteful, immoral, or evil.

Anger can be a particularly powerful emotion characterized by feelings of hostility, agitation, frustration, and antagonism towards others. Like fear, anger can play a part in your body's fight or flight response.

When a threat generates feelings of anger, you may be inclined to fend off the danger and protect yourself. Anger is often displayed through:

While anger is often thought of as a negative emotion, it can sometimes be a good thing. It can be constructive in helping clarify your needs in a relationship, and it can also motivate you to take action and find solutions to things that are bothering you.

Anger can become a problem, however, when it is excessive or expressed in ways that are unhealthy, dangerous, or harmful to others. Uncontrolled anger can quickly turn to aggression, abuse, or violence.

This type of emotion can have both mental and physical consequences. Unchecked anger can make it difficult to make rational decisions and can even have an impact on your physical health.

Anger has been linked to coronary heart disease and diabetes. It has also been linked to behaviors that pose health risks such as aggressive driving, alcohol consumption, and smoking.

Surprise is another one of the six basic types of human emotions originally described by Eckman. Surprise is usually quite brief and is characterized by a physiological startle response following something unexpected.

This type of emotion can be positive, negative, or neutral. An unpleasant surprise, for example, might involve someone jumping out from behind a tree and scaring you as you walk to your car at night.

An example of a pleasant surprise would be arriving home to find that your closest friends have gathered to celebrate your birthday. Surprise is often characterized by:

Surprise is another type of emotion that can trigger the fight or flight response. When startled, people may experience a burst of adrenaline that helps prepare the body to either fight or flee.

Surprise can have important effects on human behavior. For example, research has shown that people tend to disproportionately notice surprising events.

This is why surprising and unusual events in the news tend to stand out in memory more than others. Research has also found that people tend to be more swayed by surprising arguments and learn more from surprising information.

Other Types of Emotions

The six basic emotions described by Eckman are just a portion of the many different types of emotions that people are capable of experiencing. Eckman's theory suggests that these core emotions are universal throughout cultures all over the world.

However, other theories and new research continue to explore the many different types of emotions and how they are classified. Eckman later added a number of other emotions to his list but suggested that, unlike his original six emotions, not all of these could necessarily be encoded through facial expressions. Some of the emotions he later identified included:

Other Theories of Emotion

As with many concepts in psychology, not all theorists agree on how to classify emotions or what the basic emotions actually are. While Eckman's theory is one of the best-known, other theorists have proposed their own ideas about what emotions make up the core of the human experience.

A more recent study suggests that there are at least 27 distinct emotions, all of which are highly interconnected. After analyzing the responses of more than 800 men to more than 2,000 video clips, researchers created an interactive map to demonstrate how these emotions are related to one another.

“We found that 27 distinct dimensions, not six, were necessary to account for the way hundreds of people reliably reported feeling in response to each video,” explained the senior researcher Dacher Keltner, faculty director of the Greater Good Science Center.

In other words, emotions are not states that occur in isolation. Instead, the study suggests that there are gradients of emotion and that these different feelings are deeply interrelated.

Alan Cowen, the study's lead author and doctoral student in neuroscience at UC Berkeley, suggests that better clarifying the nature of our emotions can play an important role in helping scientists, psychologists, and physicians learn more about how emotions underlie brain activity, behaviour, and mood. By building a better understanding of these states, he hopes that researchers can develop improved treatments for psychiatric conditions.

Emotions play a critical role in how we live our lives, from influencing how we engage with others in our day to day lives to affecting the decisions we make. By understanding some of the different types of emotions, you can gain a deeper understanding of how these emotions are expressed and the impact they have on your behavior.

It is important to remember, however, that no emotion is an island. Instead, the many emotions you experience are nuanced and complex, working together to create the rich and varied fabric of your emotional life.